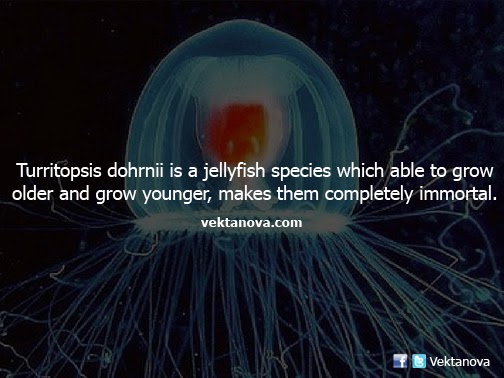 The medusa of Turritopsis dohrnii is a jellyfish species which has ability to return to a polyp state, they require the presence of certain cell types. . Careful laboratory experiments have revealed that all stages of the medusae, from newly released to fully mature individuals, can transform back into polyps.

The transforming medusa is characterized first by deterioration of the bell and tentacles, with subsequent growth of a perisarc sheet and stolons, and finally feeding polyps. Polyps further multiply by growing additional stolons, branches and then polyps, to form colonial hydroids. This ability to reverse the life cycle (in response to adverse conditions) is probably unique in the animal kingdom, and allows the jellyfish to bypass death, rendering Turritopsis dohrnii potentially biologically immortal.

Studies in the laboratory showed that 100% of specimens could revert to the polyp stage, but so far the process has not been observed in nature, in part because the process is quite rapid and field observations at the right moment in time are unlikely. In spite of this remarkable ability, most Turritopsis medusae are likely to fall victim to the general hazards of life as plankton, including being eaten by other animals, or succumbing to disease.

Title : Turritopsis Dohrnii is Able to Grow Older and Younger and Makes Them Completely Immortal
Description : The medusa of Turritopsis dohrnii is a jellyfish species which has ability to return to a polyp state, they require the presence of cert...
Rating : 5