There are Bags of Poop in the Moon 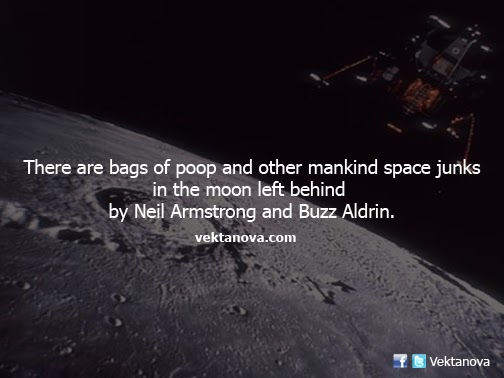 There are really bags of poop in the moon left behind by Neil Armstrong and Buzz Aldrin during their mission, Apollo 11.

When they took "one small step onto the moon", they did not only leave footprints, but also defecation stuff and other space junks they did not need to carry back to the Earth. They left some things to lighten the ship to return to the Earth like measurement tools to measure the distance between Earth and the Moon, U.S. flag, and other not needed equipments.

Nowadays, some astrobiologists are interested to collect the abandoned feces to discover in how bacteria have fared. Some anthropologists also want to protect the poop at Tranquility Base in the Moon as a historical site, meanwhile NASA haven't taken any action to this.

By sitting on the Moon for many years, Neil Armstrong and Buzz Aldrin's feces might be the most wanted and most valuable feces in the world.