Dio Ivanov
Add Comment
This article was made by Microsoft Windows, purposed for Windows Seven.

If you like to have a lot of programs open at once, it's a good idea to understand how your program windows are organized on the taskbar and how you can quickly sort through them. Learning to manage multiple windows makes it easier to get to a window quickly and to arrange open windows in a way that makes the most sense to you.

Preview windows using the taskbar
All open windows are represented by taskbar buttons. If you have several windows open (for example, if you open more than one file in a single program or if you open several instances of a program such as a web browser), Windows automatically groups open windows from the same program into a single, unlabeled taskbar icon. You can point to a taskbar icon to see a thumbnail preview of the window or windows it represents.

Tip
If you don't want to group taskbar buttons, you can turn off grouping. But without grouping, you might not be able to see all of your taskbar buttons at once.

Preview open windows using Aero Flip 3D
With Flip 3D, you can quickly preview all your open windows (for example, open files, folders, and documents) without having to click the taskbar. Flip 3D displays your open windows in a stack. At the top of the stack, you'll see an open window. To see other windows, you can flip through the stack. 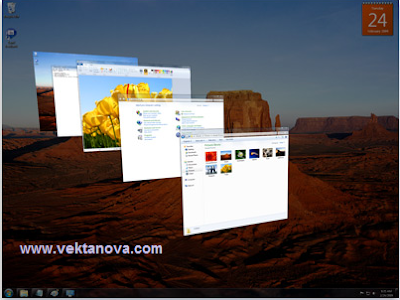 Jump to a window
Another way to quickly change which open window you're working with is to press Alt+Tab. When you press Alt+Tab, you see a list of all your open files. To select a file, press and hold Alt and continue to press Tab until you've highlighted the file you want to open. Release the keys to open the selected window.

Switching Using ALT + TAB
Tip
You can also press Ctrl+Alt+Tab to keep the dialog box open. You can then press Tab to cycle through the windows. Pressing Enter opens the selected window. Pressing Esc closes the dialog box.

Arrange your windows
You can arrange open windows in one of three ways:

Arrange windows in a cascade (left), vertical stack (center), or side-by-side pattern (right)
To arrange your open windows, right-click an empty area of the taskbar, then click Cascade windows, Show windows stacked, or Show windows side by side.

Tip
You can also use Snap to arrange two windows side by side, if you're using a single monitor display. Drag the title bar of a window to the left or right side of the screen until an outline of the expanded window appears, and then release the mouse to expand the window. Repeat this process with a second window to arrange them side by side. (If you have multiple monitors connected to your computer, this Snap feature might not work correctly.)

Resize your windows using Snap
You can use Snap to automatically resize open windows and efficiently use some or all of the available space on your desktop.

To maximize a window to fill the entire desktop
To return the window to its original size, drag the title bar of the window away from the top of the screen. 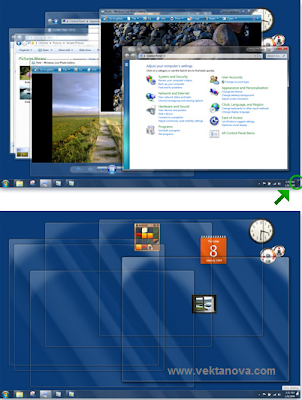 Title : Managing Multiple Windows
Description : This article was made by Microsoft Windows, purposed for Windows Seven. If you like to have a lot of programs open at once, it's a goo...
Rating : 5

No response yet to "Managing Multiple Windows"