Dio Ivanov
Add Comment
*These review is not directly from Vektanova
Just released Windows 7 flooded Internet with reports on the new operating system installation, discussions and Windows 7 installation tips. Microsoft guys learned from mistakes of Windows Vista, which at one time was met by the market rather negative, and have made every effort to please everybody with newly-fledged operating system. And it must be said, it is quite successful - reviews entirely positive, everybody is happy and in a hurry to share impressions from the installation and operation. New operating system released without revolutionary changes, however they corrected such well-known Vista issues as annoying User Access Control (UAC) and compatibility problems with several hardware components in Windows 7, and they also added useful additional functions to Windows Aero.

Everybody knows that installing the operating system requires attention, careful preparation and planning. According to statistics research made by Strategic Research Institute in New York, about 33% of PC users suffer from data loss annually. Particularly frequent cases of irretrievable loss of data take place when installing of a new operating system. Regardless of whether you already managed to install a new system or just want, in your best interest to remember about data security. Handy Backup is award-winning data backup and disaster recovery software, which will help to secure a migration to Windows 7, and then insure already installed Windows 7 against loss of data.

You probably know that Windows 7 developers strongly recommend installing the system from scratch, on a clean hard disk, instead of upgrading your system. Backing up in such a case is essential. Handy Backup allows you to move documents, applications and their settings into the new system unchanged, including:
Data backup and recovery software Handy Backup is extremely easy to use and reliable. Moving favorite programs to the new system is intact and quite able to beginner, even if it comes to migration of databases. You need to install software, create and run backup jobs, indicating what you want to backup, and where. The program supports backup on all common media and removable devices (CD / DVD, USB flash, HDD, FTP / LAN). Just in case, you can copy a distribution of Handy Backup to the backup media.

Handy Backup is one of the first holders of the Microsoft certificate "Compatible with Windows 7" and certificate "Works on Windows Vista", so application feels quite well both in the new operating environment, and the old. You have to install the program from the product website or from backup media. I must say that the connection problems should not occur, because Windows 7 connects to the Internet through a couple of seconds after the first boot without any user intervention, and this is another advantage, which Vista could not boast. 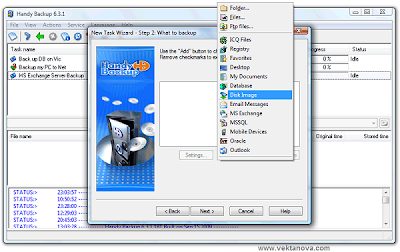 The screenshot of Handy Backup
Once you install Handy Backup, connect the backup media, create the task of restoring data from the specified destination and run it. In a few minutes all your documents, applications with all the settings and databases will be in a new place without the slightest change, and fully ready to work. In addition to the automatic transfer of documents, the experts will appreciate the ability not to set up email accounts, graphics editors and database management systems, which could take several hours or even days without using the backup program.

Handy Backup program has long been popular, it is the owner of dozens of awards and certificates, and was translated in more than 20 languages. Assistance in the migration to Windows 7 - is just one of many useful applications of Handy Backup. Developers of the program, Novosoft Company, don’t stand still and is already working on implementing of the possibility to backup and restore MS Exchange 2010 to the program.

Title : Secure Migration to Windows 7 with Handy Backup
Description : * These review is not directly from Vektanova Just released Windows 7 flooded Internet with reports on the new operating system installati...
Rating : 5